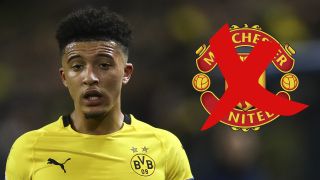 Manchester United are no longer in the running to sign Borussia Dortmund sensation Jadon Sancho, according to reports.

While it was public knowledge that United were tracking the England international, ESPN now claim (cited by the Manchester Evening News) the Reds will ‘consider other options’ after being unable to reach the stage of ‘constructive discussions’ over a deal for him.

The report adds that United believe the valuation of £80-£90m for Sancho is another example of over inflation in the market.

But would the club see that valuation differently if they were in the Champions League next season?

There is a feeling Sancho, 19, was put off by the fact United were dropping into the Europa League, and it’s no wonder because this is a player attracting interest from the world’s biggest clubs after an incredible breakthrough season with BVB.

Jadon Sancho when played on the right wing this season:

You can also admire the work BVB do as a club. The Bundesliga outfit’s season finished four days ago and they’ve wasted no time in the transfer market after securing deals for left-back Nico Schulz and wingers Julian Brandt and Thorgan Hazard.

So, Sancho can see BVB are pulling out all of the stops to improve next season, and spending another year in Germany wouldn’t be the worst idea. He’s still raw and United could go back in for him next summer – when, hopefully, we’re back in the Champions League (via winning the Europa League).

Signing Sancho would have been the sort of statement United should be making this summer. He’s one of the most exciting youngsters in football now, and they’re precisely the sort of signings the club should be looking to make.

Apparently Ole Gunnar Solskjaer wants to build his team around young English talent, but I fear the decision not to go for Sancho this summer comes down to the player not wanting to play Europa League when he already has Champions League football on a plate.

Some will argue, for just one year it would be worth sucking it up and playing for a bigger club like United, who should be back in the Champions League again in 2020. It also grants Sancho the opportunity to return home.