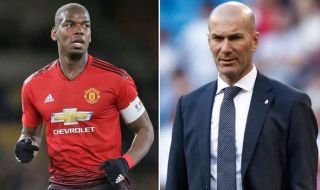 The rumours linking Paul Pogba to Real Madrid may have took the back seat in recent weeks but they’re not going away.

“[Zinedine] Zidane continues to say he’s the one I want,” Balague said on his YouTube channel, as quoted by the Manchester Evening News (watch video below).

“He thinks that he may actually play with two holding midfielders, Casemiro and somebody else in the middle, perhaps [Federico] Valverde, perhaps another one, and would allow Pogba to play in front of them. That will be the plan.

United must go in with a hardline stance to talks with any party for Pogba’s signature. He means too much to the club from a marketing point of view, which unfortunately takes priority at Old Trafford nowadays.

None of us would lose sleep over Pogba leaving but the club should try get the best deal possible.

There are better players, more suited to United, going for less than Pogba’s apparent worth.

Ole Gunnar Solskjaer must find a solution whether it’s with or without the Frenchman in midfield next season.