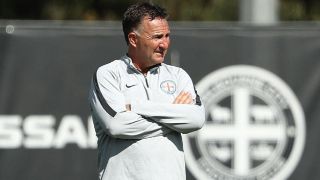 It’s great to hear Warren Joyce is set to return to Manchester United.

According to the Daily Record, the former Hull City and Wigan Athletic boss is set to replace Ricky Sbragia as the U23s coach.

Sbragia’s departure shows a sign of change at the club — and potentially brining Joyce back to replace him certainly has a feel good factor to it.

Some fans were calling for Sbragia to be replaced after the U23s finished sixth in League Two, and this was his second stint at the club. The former Sunderland manager also managed Scotland’s U17, 19 and 21 teams until he returned to United as a coach in 2017.

Joyce was only recently sacked by Australian A-League side Melbourne City, who he managed since June 2017 and guided them to fifth last season. They failed to reach the Asian Champions League.

But Joyce also worked alongside Ole Gunnar Solskjaer for a brief time with the reserves at United, so a reunion makes perfect sense. Especially when there are so many faces of old back at the club now; Joyce will have no problem settling back in after previously spending eight years with the reserves.

Hopefully, if he does complete a return to United, he can help bring the happier days back!