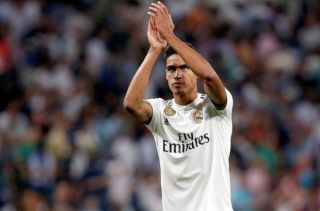 Manchester United are in the market for a central defender and Ed Woodward has previously made it clear the club would spend £100m or more on Varane, as reported by BBC Sport last year.

And this past season has been one of the worst for United as far as defensive records go. Ole Gunnar Solskjaer’s men conceded 13 goals in their last six games of the season, yet we still dished out contract extensions to the Chuckle Brothers (Chris Smalling & Phil Jones)…

But any talk of Varane leaving Real Madrid for United seemed to diminish once the Reds failed to qualify for the Champions League. The Reds were reportedly targeting the French defender, according to The Express.

Varane has won everything in the game at club level, as well as the World Cup with France. He’s a winner and it’s going to be hard for United to attract someone like that when we’re competing in the Europa League…

The Frenchman has now confirmed he is intent on staying put at the Santiago Bernabeu.

Of course, having Zinedine Zidane back as manager may have persuaded Varane to think twice about leaving the club. Real Madrid is where he has become one of the game’s best defenders and there’s nowhere to really go after Los Blancos.

Not with United in its current state.

Varane issued this promising message about Real Madrid getting back to previous heights after a difficult campaign.

“We have fought and we have tried hard, we can not blame anything, but it is true that we missed that spark in the difficult moments,” he added. “They are cycles, I have not been to my best level but I will see the best Varane again.

“We have to evolve and Zidane is clear about it, we have to rebuild, we have to change things as in a change of cycle.”