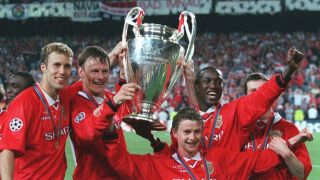 The squads have been revealed for the upcoming legends match between Manchester United and Bayern Munich.

The match takes place on Sunday at Old Trafford, 20 years to the day of the iconic Champions League triumph in Barcelona, and we’d love to see United win it at the very end like they did in 1999.

A dramatic 2-1 win secured United’s historic treble as the Reds also won the Premier League and FA Cup that season. Such has feat has never been achieved by another English club.

It’s going to be great for fans attending to see all the stars from ’99 back playing under Fergie at Old Trafford. Perhaps the best way to ease into a summer without much football.

Phil Neville and Ryan Giggs can’t make the game due to managerial commitments — but fear not as Gary Neville, David Beckham, Paul Scholes and Nicky Butt will be available to play, as Class of 92 members.

Current boss Ole Gunnar Solskjaer will get another chance to play with Andy Cole, Dwight Yorke and Teddy Sheringham.

All of these players will be joined by Ji-sung Park, Louis Saha, Mikael Sylvester and Karel Proborsky. Although none of the four played for United in ’99, they will still play due to their support of the United Foundation, with all funds raised from the event going towards the initiative.

You might be thinking this can’t get any better, which it does… Fergie will be joined by Steve McClaren and Bryan Robson in the dug-out.

Bayern have eight players who took part 20 years ago.

The 2019 Champions League final features two Premier League sides — Liverpool and Tottenham — which means it won’t be United lifting the trophy 20 years on from that incredible night in Barcelona. Finding the best football betting deals on the Champions League final is always difficult and time consuming, but Gambling Deals have you covered this year. We’re rooting for Spurs to come out on top but it’s hard to see past this Liverpool side – and it hurts to say that.

Liverpool winning the Champions League this season would be a kick in the teeth — as it is whenever they win something — but at least it’s not the Premier League they’re walking away with. Losing the final now would drive their supporters mad.

Full squads below for the Manchester United legends vs Bayern Munich match, via Manchester Evening News.