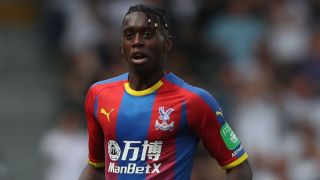 Manchester United are preparing a bid for Aaron Wan-Bissaka, according to reports.

Ole Gunnar Solskjaer is targeting the Crystal Palace right-back to bolster his defensive options next season.

The Reds cannot go another season with Ashley Young in the role, with the former England international past his best and finding it difficult to get up and down the pitch like he once could.

And, any talk of Youngy being captain next season is just laughable. What the f**k is happening to this football club?

It’s a relief to see Wan-Bissaka’s name mentioned in the gossip columns. He looks an incredible talent after bursting onto the scene for Crystal Palace, and whispers around Old Trafford suggest Ole Gunnar Solskjaer wants to build his team with young English talent.

According to the Evening Standard, United are expected to table an opening bid of £25m for Wan-Bissaka.

The offer is certain to be rejected, as per reporter James Robson, although it will at least kick-start negotiations.

Diogo Dalot was brought in as a youngster alternative for the right-back position last summer, but while the Portuguese starlet has shown glimpses of brilliance, he has not impressed me enough to think he warrants a starting place for United. In this current side, yes, but that says very little about Dalot.

The standards at United are at a low. By signing a young talent like Wan-Bissaka, United should be cementing a top right-back for the foreseeable future. The 21-year-old is worth the investment.

The ES add that Palace are expected to hold out for at least £50m, which is a lot for a relatively unproven star. Wan-Bissaka has yet to become an established English international.