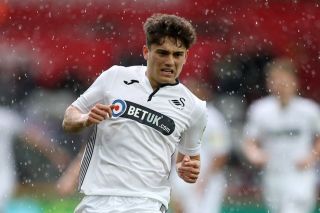 Swansea City insist there has been no contact from Manchester United over Daniel James, despite reports claiming personal terms have already been agreed, as per talkSPORT.

The Welsh club is saying that these stories are premature and should be taken with a pinch of salt.

NEXT: (Video) The best of Man Utd target Daniel James

Of course, the speculation has been covered at length by the Manchester Evening News, who go into detail about how the transfer is working out.

Intel like James’ entourage downplaying interest from United earlier this month, among others.

Now Swansea are doing the same – for whatever reason – but this has been reported by some of the most reliable hacks who cover United regularly. This could just be a matter of Swansea trying to keep their pride intact after losing a star player.

It’s great to see the club shake up their already questionable strategy in the transfer market. Ed Woodward has been guilty of signing big names to hang his jacket on, and many of those signings were expensive flops.

Ole Gunnar Solskjaer needs to set his mind on team-focused additions before adding any marque names. Rome wasn’t built in a day and we should aim for steady progression.