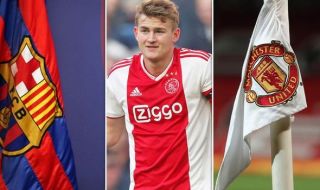 Ajax captain Matthijs de Ligt has suggested he would favour a move to Barcelona over Manchester United.

Unless we plan on lying to ourselves, most footballers will feel that way in 2019. While the Reds compete in the Europa League next season, Barcelona will be going all out to win the Champions League.

Moreover, Barça are considered favourites to sign De Ligt but the deal is reportedly being held up by the player’s agent, Mino Raiola, who is requesting a larger salary for the defender as well as a substantial agent’s fee.

Last week it was claimed that De Ligt is not ruling out a move to United, despite Ole Gunnar Solskjaer’s side failing to qualify for the Champions League.

It was said that De Ligt liked the idea of being the leading force of this new United side trying to make big improvements for the future after some problematic years following Sir Alex Ferguson’s retirement.

But the 19-year-old defender has now indicated that he’d prefer a move to Barcelona over United, to play alongside his Ajax teammate Frenkie de Jong.

De Jong has already agreed to join Barça in a £65m deal.

‘I think he has developed very well this year,’ De Ligt told VoetbalPrimeur (via the Metro) when asked about De Jong.

‘He deserves the move to Barcelona.’

Then asked if he will be playing alongside De Jong at Camp Nou, De Ligt replied: ‘It would be nice to play with Frenkie in a team, but I don’t know if it will happen.’

It seems like a major ask for United to pull off this transfer. He’s definitely Barça bound.

United will need to lose elsewhere for a top centre-back if he ends up joining the La Liga champions.