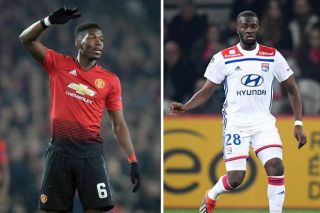 Manchester United will only formalise their interest in Lyon midfielder Tanguy Ndombele when they know exactly what Paul Pogba’s future holds, according to The Metro.

There are fears United could be falling behind in the race to sign Ndombele, with the Pogba saga likely to drag on over the coming months.

NEXT: Why Man Utd will make Mason Greenwood wait until he’s 18 before offering new contract

L’Equipe claim that Paris Saint-Germain held extensive talks with Ndombele’s representatives and that contract talks have been discussed at length.

Pogba has been long linked with a move to Real Madrid after another inconsistent season for United, but now fans have gone beyond the stage of caring about the Frenchman.

You can’t blame them when his commitment to the cause doesn’t match the importance of his social media activity.

The brand > football club, so in many ways he suits what Manchester United has become. A sorry state for this football institution.

Pogba also fell out with former United manager José Mourinho earlier this season, and was stripped of club captaincy.

But while we’re sounding very negative on Pogba (apologies), we can’t ignore the fact he finished the season as the Reds’ top scorer.

Pogba’s agent, Mino Raiola, is said to be looking to engineer a move for his client to Real Madrid this summer.

That’s when the Metro reckon United will up their interest in Ndombele.