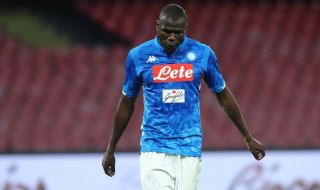 According to Gazzetta dello Sport reporter Nicolo Schirra, Napoli have rejected a bid from Manchester United for Kalidou Koulibaly.

The Senegal international is renowned as one of the best centre-backs in football right now, and that is exactly what the current United side needs.

Moreover, it’s an area of the team that Ole Gunnar Solskjaer must strengthen this summer if United are to have any chance of improving next season.

It’s staggering that we still field full-strength teams containing either Chris Smalling or Phil Jones, but not qualifying for the Champions League next season should be a wake up call.

Schira claims United bid €110m for Koulibaly and that the bid has been rejected.

#Napoli have rejected a #ManchesterUnited’s bid (€110M) for Kalidou #Koulibaly. De Laurentiis doesn’t sell him and the termination clause (€150M) will be valid only from 2020. #transfers #MUFC #mutd

Koulibaly’s buy-out clause doesn’t kick into play until 2020, meaning in order for a deal to materialise the Reds must negotiate cleverly with Napoli over the coming months.

Ajax captain Matthijs de Ligt is another option – but the Netherlands starlet looks destined to join Barcelona this summer.

The Reds could also reignite their interest in Toby Alderweireld.