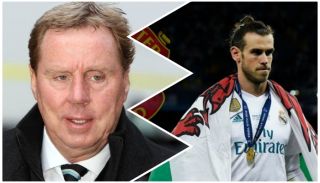 The Welsh winger faces an uncertain future at Real Madrid, with manager Zinedine Zidane not being his biggest fan by any means.

There has always been a feeling that Bale never quite got the appreciation he deserves at the Santiago Bernabeu, but it doesn’t really help that his stint in Spain has be struck with constant injuries and niggles.

He was left out of Zidane’s team for Madrid’s final three La Liga games of the season.

Now speculation is ongoing and United are one of the clubs still closely linked with a move for the Wales international.

Of course, United previously targeted Bale but were unable to make a deal happen. This happened prior to his move from Southampton to Spurs, then Spurs to Real Madrid.

Redknapp believes the 29-year-old would be a good fit at Old Trafford.

“Whoever signs him [Bale] will be signing a fantastic player,” Redknapp told Mail Online. “Any club he can go to he can make a difference – he can turn any club around.

“He would be a great signing for anyone – Man United could do with Gareth Bale.”

I do feel Bale’s time to come to United has gone. At 29, he will probably still expect the £13m annual salary he picks up at Real Madrid, and we’ve already had a nightmare with Alexis Sanchez on a ridiculous contract.

Time will tell if United get serious about their interest in Bale again. I wouldn’t bet on it.