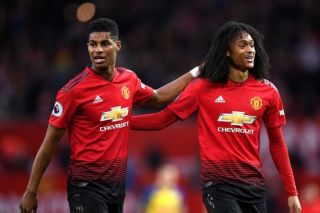 Olympiakos want to sign Tahith Chong on a season-long loan, according to reports.

It comes from Greek outlet SDNA that Olympiakos expect there to be plenty of interest in Chong from other clubs around Europe.

NEXT: Man Utd willing to delay move for Lyon midfielder until Pogba situation is dealt with

The Netherlands youngster got a taste for first time football towards the end of the season, with Ole Gunnar Solskjaer making his admiration towards the 19-year-old clear.

Solskjaer must now ensure that he creates the best possible environment to allow Chong develop.

However, Manchester Evening News note that Solskjaer recently told MUTV that he expects the majority of his young players to remain at United next season.

That could give us some indication about what to expect next season. It could be a fresh start for the squad with a number of unfamiliar names thrown into the mix.

It would be good for Chong to gain first team experience, but is it necessary to send the kid to Greece? What benefits will he get from playing Greek football?

These are the sort of questions Solskjaer and others at United will be asking if Olympiakos come knocking for Chong.