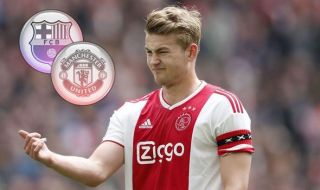 While Manchester United have dealt with some of Raiola’s biggest clients in recent years, that has a lot to do with the money the club is willing to throw on marque players and agent fees.

Now it looks like United may be taking a different approach to the transfer window, with names such as Daniel James from Swansea City before targets, as per The Sun.

But Manchester United will always have room for a marque signing; especially with Ed Woodward always looking to hang his jacket on big name signings whether or not they fit the team or will please the current manager.

Moreover, not all of Raiola’s players have done well at United, yet reports suggest he is still keen on parking his clients at Old Trafford.

According to Mirror Football via Mundo Deportivo, super agent Raiola is making it difficult for Barcelona and De Ligt to come to an agreement on a deal due to excessive pay demands.

It is understood that Raiola is demanding a figure between €8m and €10m from Barça to arrange a potential deal.

If the Spanish champions pull out of negotiations, a transfer to Old Trafford will look more likely.

There is a lot of talk about De Ligt, 19, and his impressive leadership qualities. He is exactly the type of player United should be looking to add to their already weak defence.

The Express recently linked United with a swoop for De Ligt.

Fans will hope Ole Gunnar Solskjaer looks to build a team around De Ligt at the back. The future of European football.