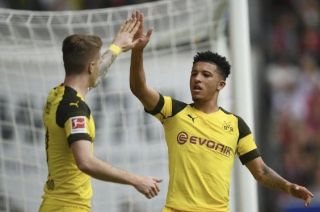 Manchester United target Jadon Sancho insists his focus for next season is winning the Bundesliga title.

That’s likely to mean Sancho will stick it out at Borussia Dortmund for another season at least, but The Independent ran a story earlier this week suggesting the 19-year-old England international has major reservations whether Old Trafford would be the right environment for his development.

This year Sancho got a proper taste of Champions League. It’s understandable that such a competition will motivate players to think that way.

Sancho is not going to drop playing in the Champions League for the Europa League, is he?

The Sun claim United are now chasing the signature of Swansea City winger Daniel James, with the club perhaps willing to wait until next summer to make a move for Sancho?

Of course, there are no guarantees he will still be at Dortmund next season. Real Madrid are Paris Saint-Germain have also been linked with moves for the youngster.

Sancho has since given a strong indication he will be around next season to help his current teammates win the Bundesliga title.

“Next season our target is to win, not come second,” he said, as quoted by the Evening Standard.

“I’m really happy with how I played this season. I wasn’t playing that much at the start of the season but was in the team more often later on. It’s all about hard work.”

It comes as a major blow because at one stage of the season it looked like Ole Gunnar Solskjaer might have got a Champions League place.

And, from watching Sancho play for BVB this season, there isn’t another young English talent I would rather build a new attack around.

He’s going to be some player!