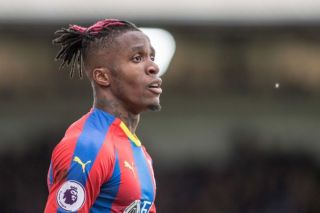 Wilfried Zaha was the last player Sir Alex Ferguson signed for Manchester United before retiring as manager. He didn’t last very long before being sold back to Crystal Palace and now he is renowned as a top winger again.

When Zaha came to United in 2013 and never truly settled under the newly appointed David Moyes. Now with years of Premier League experience under his belt, Zaha could make a return to Old Trafford.

The Mail claim he has told the Eagles that he wants to leave the club in the summer.

Moreover, The Telegraph state that the 26-year-old is prepared to move back to the Old Trafford club, but Palace want £100 million but there’s a feeling a fee if £70 million might be accepted for their most prized asset.

Zaha is a constant threat coming from the right for Palace — but that was also said when he was a Championship player before joining United.

He’d probably tell you the move came too soon for him. It didn’t help that Ferguson decided to retire after signing him considering how the Scot was able to get the best out of young players.

Under Moyes, Zaha didn’t believe in himself. He had to move away and build his confidence up again, which he’s been successful in doing!

In the season just finished, he scored 10 goals and provided 10 assists in 34 league fixtures under Roy Hodgson, who want want to lose his star player.

United are hopeful of selling Alexis Sanchez this summer and we’re getting the impression Ole Gunnar Solskjaer wants to have a number of good options on the flanks. Proper United wingers, not a washed up mercenary.

What do you think? Should Solskjaer bring Zaha back to United?