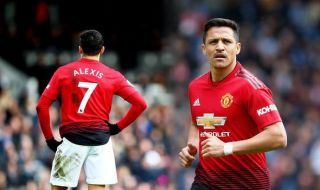 Alexis Sanchez has been a absolute nightmare at Manchester United.

So bad that the Chile international will probably go down as one of the club’s worst ever signings.

The best thing he’s done over the past year and a half was when he gave everyone a glimpse of his piano playing. I speak for most United fans when I say I hope he’s elsewhere next season!

Sky Sports in Italy have reported that both Juventus and Inter Milan are showing an interest in signing Sanchez.

They must see something in the Chilean and believe he still has a bit left in the tank, but at United he has looked completely finished as a footballer at the top level.

There is no bitterness towards Sanchez — only you asked around the dressing room, to which you will hear something along the lines ‘how the f*ck is he United’s highest paid player?’

It’s a mystery and his move to Old Trafford could not have gone worse.

Sanchez’s representatives have apparently met with officials from both Juventus and Inter already, indicating that the attacker would be interested in a return to Serie A, where he previously played for Udinese.

But something must give… United must be willing to take a loss on Sanchez and he will obviously need to take a pay cut.