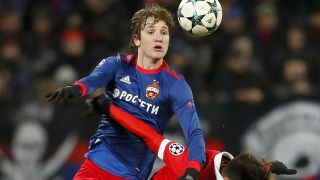 Football journalist Guillem Balague claims that Manchester United are among the clubs who are interested in signing Mario Fernandes from CSKA Moscow in the summer.

The right-back is reportedly being closely followed by United, Manchester City, Bayern Munich, Chelsea and Barcelona.

Although Chelsea have a transfer ban, so their interested can be dismissed unless the ban is frozen while appealing to the Court of Arbitration for Sport (CAS), as per the Daily Mail.

It will have serious consequences to Chelsea if the ban kicks in now — without any preparation for the coming years.

Balague adds that it will cost a transfer fee of €25 million to sign the Russian, who could fix a problematic area for the Reds.

Fans will hope Ole Gunnar Solskjaer addresses the issues at right-back before the 2019/20 season begins by signing a player good enough to start most weeks. Diogo Dalot is still very raw and Ashley Young — let’s face it — is now a sorry excuse for a full-back at the top level.

This a new name to add to United’s list of targets for the summer. Time will tell if Solskjaer wants to make a move for the Russia international.