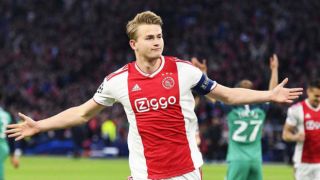 Manchester United are still in the running to sign Ajax captain Matthijs de Ligt, according to Luke Edwards of the Telegraph.

Even though the Reds won’t be playing in the Champions League next season, apparently sources in Amsterdam believe the 19-year-old remains interested in a move to Old Trafford.

Manager Ole Gunnar Solskjaer should try to build his United side from the back, especially when the defence is so poor and our rivals have shown more initiative to fix their defensive frailties.

But United are not just shopping for talent, they’re also seeking the right personalities. Solskjaer has no other choice because the dressing room is so toxic.

De Ligt recently showed wisdom beyond his 19-years with a fantastic end of season speech to the crowd in Amsterdam, as seen below.

This looks like the type of player we should be trying to build the backbone of this Manchester United side on… right in the heart of defence, leading from the back.

But there are other big clubs chasing De Ligt’s signature too, with Goal linking the Netherlands international with a move to Barcelona. They’re in the Champions League next season and will be expected to challenge again. A huge difference.

And, by signing for Barça he would be following his Ajax teammate Frenkie De Jong to the Nou Camp.

It’s going to be a huge summer for De Ligt as he attempts to map out his career as a footballer. The wrong decision could lead a footballer down the wrong path and the people of Netherlands won’t want that.

He should be able to build a formidable defensive partnership with Liverpool centre-back Virgil van Dijk in the national team before the European Championships.

For now, we’ll just watch this space. No reason to get excited about him joining just yet!