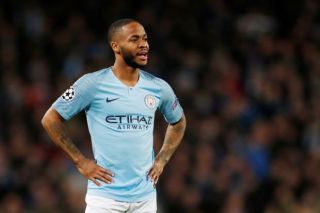 Raheem Sterling has spilled the beans by revealing he supported Manchester United in his youth, ahead of Saturday’s FA Cup final between Manchester City and Watford.

The talented winger enjoyed another fine season under Pep Guardiola, winning the Premier League and League Cup, and with the FA Cup still up for grabs.

City will probably try claim an all-English treble if they win on Saturday, but Sterling — a Red from his youth — should know what the real treble consists of (Premier League, FA Cup and Champions League).

No matter what happens at the weekend, City fell short in Europe.

Sterling has been speaking to The Mirror about his attendance at the 2007 FA Cup final.

Chelsea won but Sterling admits he was in the crowd cheering on United.

“I was at the final in 2007,” Sterling said. “I shouldn’t really say this — not now, definitely not now! — but when I was young I was a massive United fan.

“I had an old United kit, from when they won the last FA Cup.”

But United last won the FA Cup in 2016! He was hardly wearing that shirt whilst playing for City…

Moreover, Sterling burst onto the scene at Liverpool in 2012 and quickly became a key player under former manager Brendan Rodgers.

At City though, the England star has reached a new level. Pep Guardiola has been an incredible mentor for the winger.

Sterling might receive a friendly backlash for these comments but the City fans won’t care if he scores a winner at Wembley this Saturday.