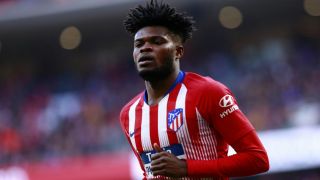 Thomas Partey is a name that won’t go away.

The Atletico Madrid midfielder has enjoyed a brilliant 2018/19 campaign, making 40 appearances across all competitions and scoring three goals.

NEXT: Man Utd consider £22m Barcelona ace to replace one of the best in the business

His performances in the middle of the pitch helped ensure Atletico Madrid finished runners-up to Barcelona in La Liga this season, which has unsurprisingly led to transfer talk with clubs such as Manchester United and Inter Milan regularly mentioned.

According to the Manchester Evening News, Partey’s agent Daniel Jimenez has revealed his client’s buy-out clause amid ongoing rumours over his future.

Jimenez addressed the Ghanaian’s links to Inter in an interview with Passione Inter: “I can’t say that right now, I haven’t talked to anyone, even if Inter are a top club.

“There’s a €50 million release clause in his contract, a figure that’s cheap for a player like Thomas.

“We’ll wait for the season to end and then we’ll see.”

If United are genuinely interested in Partey, they will be intrigued to hear the player’s agent put him in the shop window so blatantly.

Inter may be a big club, but United… we’re far bigger!

The Reds need a midfield enforcer. Someone to come in and break up play before swiftly launching dangerous counter-attacks.

United have no other choice but to sign midfielders this summer, especially with Ander Herrera’s departure confirmed. At least two of high quality are needed.