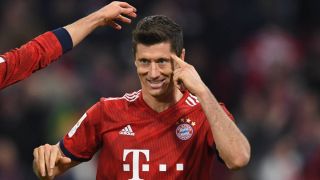 Manchester United have reportedly made contact over a potential transfer for Bayern Munich striker Robert Lewandowski.

The Polish striker has been banging in the goals over in Germany for years, with Borussia Dortmund and now Bayern, building the reputation of a lethal finisher.

According to Kicker, as per Caught Offside, United have made their interest clear, which could work in our favour if Romelu Lukaku leaves this summer.

A previous report from The Mirror— linking Chelsea and Liverpool to Lewandowski — suggested that he could be for sale for around £70 million this summer.

And if Bayern are planning a squad revamp over the coming year or so, some big names could see an opportunity to join Premier League clubs and the Bundesliga champions rarely struggle to sign up the best young talent in Germany.

At the age of 30, this could still work out in United’s favour short term. Ole Gunnar Solskjaer needs a goalscorer and could build his first side at Old Trafford by surrounding Lewandowski with young talent.

Lukaku doesn’t cut the mustard in this United side, looking the complete opposite to what Solskjaer wants up front. Then there is Marcus Rashford, still the young kid on the block, but we can’t go into a new season with him as our main striking outlet. He has never scored more than 20 goals in one season and this is Manchester United!

Lewandowski could bring that sort of tally to the table in a United shirt, so let’s see if anything will come from these reports.