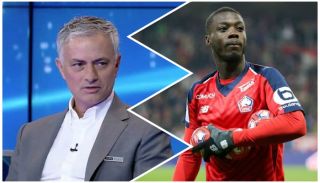 The Mirror understands that Manchester United are weighing up a £45 million bid to sign Lille winger Nicolas Pepe.

Pepe has enjoyed an excellent season in Ligue 1, scoring 21 times for the French outfit.

NEXT: Premier League profit table: Which Man Utd matches paid out most this season

The 23-year-old is nimble and quick down the right, and that’s where United have lacked options for years. It certainly makes sense for the club to target a player of his ability.

This past season, Pepe also registered 12 assists for Christophe Galtier’s side, which speaks volumes about the type of service he can give fellow frontmen.

There’s a feeling Romelu Lukaku could leave Old Trafford this summer, with Sky Sports running quotes from the Belgian forward suggesting he has a dream to play in Italy, but this could open up more opportunities for Marcus Rashford to improve on his scoring. Who knows, maybe Mason Greenwood will get more game time next season?

Now, in a recent interview with French newspaper L’Equipe, former United boss José Mourinho has pretty much given his approval to a United move for Pepe.

Mourinho was asked whether Pepe would be the sort of player he would like to sign at his next club, whoever that may be.

The Portuguese said in reply, as quoted by The Mirror: “I do not know what is my next club! But everyone knows that he is a quality player, in the making.

“He played almost every game, [and] was decisive for his team.”

Liverpool’s interest in Pepe has also hit the media, as per talkSPORT, so we could have a bidding war of some sort on our hands. But the fact they’ve Champions League football next season could go against United…

That’s why I worry about the having Ed Woodward around. United need to go for top players still, but without a clear plan for the future (think they call it projects in football nowadays), it’s going to be difficult to pitch a move to the very best players.

Before players didn’t think twice about United. For Sanchez, this sorry state of a club was an opportunity to earn ridiculous money. That’s clearly the only reason because he doesn’t seem to care.