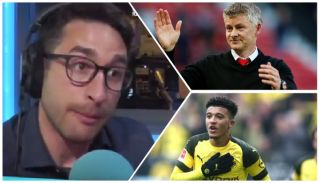 Manchester United need to be clever this summer. The right profile of player must be signed with a view of building solid team chemistry.

Fans want to see United play with identity. Something to be proud of representing in the stands and something to build on a good old fashioned roar from the terrace.

A player attracting lots of attention this year is Borussia Dortmund sensation Jadon Sancho, who first build his name around these parts by coming through the Manchester City academy.

He didn’t fancy it there and left for first team football before tearing the Bundesliga apart.

Rumours have swirled around about who the Reds could sign and Sancho’s name is constantly on the lips.

Now, BBC’S David Ornstein is getting in on the act.

Ornstein has built the reputation of a reliable hack for being incredibly accurate with Arsenal transfers, but it seems he also has some contacts at Manchester United.

While speaking to BBC 5 Live Sport, Ornstein addresses United’s main issues ahead of the summer transfer window, but his comments on Sancho should be noted.

❤️ Koulibaly: ‘They love him’

He starts by saying we all know already. Sancho is a top United target.

But apparently the 19-year-old is preferring a move to Old Trafford rather than anywhere else, while wanting to go somewhere with stability and Champions League.

It sounds like the youngster is stuck at a crossroads.

Ornstein adds that this deal was looking ‘nailed on’ a couple of months ago, but now it looks like United could pay a heavy price for missing out on a top four finish in the Premier League.

The BBC hack mentions two other names in his United round-up. He says the Reds could be put off by Kalidou Koulibaly’s price tag, while right-back Aaron Wan-Bissaka has already reiterated his desire to remain at Crystal Palace next season.