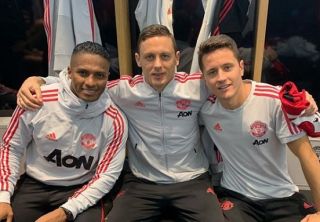 Two good servants to the club are on their way,

Antonio Valencia and Ander Herrera have both played their last game for Manchester United.

A decision was made not to offer Valencia a new deal, whereas the club could not come to agreement with Herrera, who also leaves as a free agent.

Herrera has been linked with a summer move to PSG, as per The Express, but nothing has been confirmed yet.

He shared a nice moment with his daughter on the pitch following Sunday’s defeat against Cardiff and had photos taken with an Estrella endorsed flag.

Valencia, on the other hand, is years past his best. He’s unable to get up and down the line like he could could, and people probably shouldn’t forget that his preferred position is on the wing rather than full-back.

The Ecuador international arrived from Wigan the same summer United sold Cristiano Ronaldo to Real Madrid. Clearly, it wasn’t a like-for-like replacement but Valencia still played his part in some very good teams for United, towards the end of Sir Alex Ferguson’s career.

Nemanja Matic has jumped to Instagram to send the lads a farewell message, wishing both of the players the best in the future.

The Serbian midfielder captioned his post with the following: “Great people and top class players!!!Boys i wish you best of luck for the future.”

Great people and top class players!!!Boys i wish you best of luck for the future 🤝⚽️