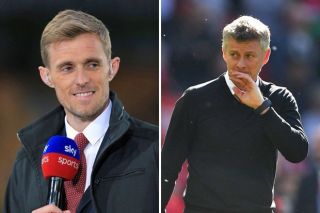 Darren Fletcher looks set to get the technical director job at Manchester United.

It will be the first time the club has had someone in such a role, so nobody is really sure what to expect. If Ed Woodward has anything to do with it, which we’re sure he has, it will be a watered down version of what we hoped for from a director of football.

NEXT: Which players Manchester United could sign this summer

That’s probably why the club hasn’t be able to attract a big name with experience working in the role at other European clubs.

However, the likes of Mike Phelan, Rio Ferdinand, Gary Neville, and Edwin van der Sar have been in contention so far, if you believe all the reports, and now another ex-player has entered the fray.

According to Sky Sports, Fletcher is not only being considered, but he is a leading candidate to get the job at Old Trafford. They also claim Fletch has already held negotiations with the club’s hierarchy.

But RB Leipzig’s head of recruitment Paul Mitchell and Brighton director Dan Ashworth are other names being thrown into the mix. Nobody is being ruled out just yet…

It’s important that United get this sort as soon as possible. Having it unsolved makes Solskjaer’s job a little more dependant on Woodward, and that’s never a good thing!

Trusting United to do this properly is another story.