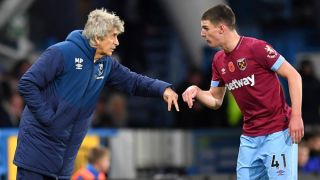 Manchester United might have been handed a boost in their pursuit to sign West Ham midfielder Declan Rice.

Hammers boss Manuel Pellegrini has admitted he was unsure about the player’s future, amid links to clubs such as United and Manchester City — with the Manchester Evening News commenting on the latter’s interest.

NEXT: Man Utd keeping tabs on promising £35m starlet along with Liverpool and Spurs

Meanwhile, The Express claims Rice is one of United’s top transfer targets this summer, which could see Nemanja Matic left on the squad fringes or in the transfer window?

West Ham finished the season with an impressive 4-1 win over Watford, but now they must fight off interest from other Premier League clubs.

Pellegrini says he is expecting interest from big clubs and refused to guarantee that the England international would still be at the London club next season.

“It’s impossible, I cannot know the future,” the Chilean said, as quoted by The Mirror.

“Maybe some of the big teams, or all of them, will want him. But that is one thing — the other is whether he will stay here or he goes, and I cannot say at this moment.”

Rice has been exceptional this season and his versatility could be a welcome addition at United.

He can play at centre-back as well as in midfield, so it makes total sense to go for him this summer considering we need better defenders and midfielders for next season and beyond.

United’s season ended in ugly fashion, a 2-0 defeat against Cardiff City, and Ole Gunnar Solskjaer has a huge job on his hands in order to succeed.

Do you want United to sign Rice for next season?