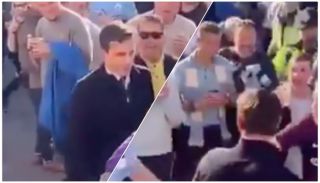 Gary Neville knows he can expect a hostile atmosphere when in enemy territory, but that doesn’t excuse what a bunch of Manchester City fans did on Sunday.

It’s unclear whether this video was recorded before or after the match, with City beating Brighton and claiming a second consecutive Premier League title and pipping Liverpool in the process.

Recorded on Snapchat, the person responsible for getting the footage captioned their video “Red c**t” which suggests they were also lapping up the incident.

In his work clothes, Neville walks through the crowd trying to defuse the situation but then the clowns, who are City fans, start throwing bear towards the former Manchester United captain.

A Liverpool fan account shared the footage but claims Neville was ‘supporting’ City all season.

Have we missed something?

And he was supporting City all season 🙄 pic.twitter.com/6blqCJEqDG

Anyhow, it’s a disgrace that someone going to or coming from work has to put up with this shit.

Neville wasn’t liked as a player (by rivals) but surely people’s eyes have been opened since he became a thoroughly insightful pundit?