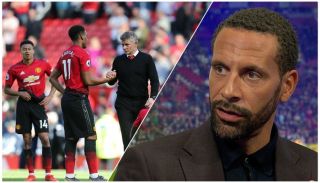 Rio Ferdinand has no problems letting his feelings known about the current Manchester United team.

They’ve underperformed all season and now questions are being asked of Solskjaer’s credentials, even though most of the issues we now see have existed long before he became manager.

The Norwegian was unable to give fans something to cheer about on the final day of the season. Cardiff City came to Old Trafford and won 2-0.

Everyone knows he has huge task on his hands to get United back where they belong, and fans should lower expectations for now at least. The team requires too many changes for Solskjaer to mount a title challenge as soon as next season…

Ferdinand says while it wasn’t the end to the season we wanted, it shows how much hard work needs to be done in order for United to get back to the heights experienced regularly with the former England centre-back in the team.

Not the way we wanted the season to end… Work Ethic & Mentality plays a massive part in individuals & teams being successful. Lots of hard work ahead!! @ManUtd

During the past few weeks it has become clear that Solskjaer’s football at the start of his reign was taking its toll on the players because their fitness levels aren’t up to scratch. Unacceptable for players at this level!