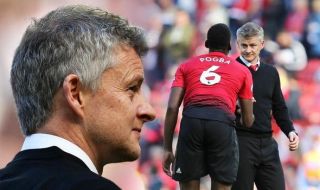 I can honestly say with my hand on my heart, that this season is the most I ever felt so despondent about my football team. I love United, always have done, always will do, nothing could ever change that fact. I went to my first match in the 70’s and have gone ever since. I loved those days of the 70’s and 80’s, just three trophies in over 20 years. So it’s not a lack of success that’s causing the despondency, it’s the lack of direction.

I don’t see one positive from this season that we can carry into next season as a building block for future development. We don’t have an identity football wise, we lack a brand of football, we lack quality and we lack desire. Worst of all we have a toxic dressing room which needs addressing now.

I don’t advocate changing the manager again, we are into our 4th, post-Sir Alex Ferguson and nothing ever changes. We’re caught in a downward spiral that we can’t get out of and it’s getting worse.

For the first time in my life I wouldn’t care if any of the players left. I have never felt that way before, none of them would get into any of SAF’s three great teams he built. De Gea has been outstanding for us over the years and gave us fantastic loyal service. If he doesn’t want to renew his contract, then he can go with my blessing and my thanks. He’s obviously being affected deeply by the situation because his form has dipped remarkably.

From the defence, Lindelof looks like he cares and his performances this season have backed that up. Valencia and Young are too old to be playing attacking full-backs. Shaw is too unfit, lazy and one dimensional, he’s so predictable in everything he does. As for the other central defenders, José was right, we needed another two and still do. Darmian, Rojo, Jones, Smalling and Bailly, are all either not good enough or absolute liabilities. Dalot is young but so far I haven’t seen a footballer good enough for United bursting to get out.

The midfield is a huge area of concern. Herrera has the heart but lacks the creative quality and has left the club. Matic was a class footballer in his day but his mobility is now a problem. Fred is just so lost and everything he ever does well is undone by costly mistakes. McTominay is similar to Herrera, he tries and gives his all but lacks the real quality to be a top class midfielder. Pereria will never make it at United, he’s simply way out of his league and will do much better in a lesser club in a lesser league.

The biggest issue is Pogba, he undermines everything about United. SAF wanted him gone as a young lad due to attitude and we’ve brought him back as an adult, but the bad attitude persists. He has talent but only produces it on his own terms. I used to think he was an enigma and we just had to find a way to get the best out of him. That notion is well and truly out of the window now. Both José and Ole to an extent have tried every formation and permutation of players to get him to perform to a high standard on a regular basis. He just can’t do it, he needs too much time and space and the high press of the Premier league doesn’t afford such luxuries. I really believe he has a toxic effect on the dressing room and squad in general, let’s cash in whilst he still has some value post World Cup. Oh and I know he’s top scorer this season and has most assists but stats do lie sometimes and half those goals were penalties. Christ, even his run up for a spot kick deadens the joy of him scoring for me.

That now brings me to the forwards or attacking midfielders in our squad. Mata, lovely player but the game is too fast and too physical for him now. Lingard has never been good enough and will never been good enough. He lacks quality, pace and strength and gets an easy ride because he’s popular on social media and scores a worldy once or twice a season. Lukaku had a decent first season but hasn’t built on it at all. He’s far too immobile with his physique and his touch is getting worse, he’s not the answer at all. Martial, just ridiculous talent in his locker but lazy, miserable and doesn’t have the brain or the desire to attack players. Definitely £50 million down the drain in my eyes.

Sanchez has had an awful time at United and its gone so far that it will never turn around now. He has to go for sure. That leaves Rashford, he has gone backwards under two managers. He was a raw talent when he broke into the team 4 seasons ago and now he’s just raw and the talent and potential has gone. He can’t control the ball with his back to goal, he can’t head or pass. His decision making and finishing are extremely poor as well. I said after his breakthrough season that he was in danger of following in Webeck’s footsteps and I think that is coming to fruition. Somehow though, United and the English media have him in the not allowed to criticise category. Why? I think they have realised all the above and still portray him as the new Ronaldo. Hence why he takes all the corners and free kicks, it’s almost that they want to keep his stock high. If £100m is on the table for him, snap off the hands of whichever blind man is offering.

So as you can see, there is nobody that would upset me if they went. I’m not an idiot and realise you can’t just change a whole squad over one summer but whoever comes in must realise they are joining a very mediocre squad. As for youth coming through, Chong and Gomes need to go on loan in the Championship as do a few of the others, as there is no mileage in playing for our under 23’s. I would take a punt and promote Greenwood to the first team squad full time and give him plenty of opportunities. If De Gea goes then it’s a no brainer for me to get Henderson back in the fold and would make him first choice. The one thing United have done right over the last decade is produce top goalkeepers and this lad is no exception. He’s just excelled in the Championship and been the top keeper in that division. Yes, he might make some mistakes for us but all our top keepers have done that over the years. I would also bring back Tuanzebe and get him playing regularly in the first team.

I said earlier that I don’t want Ole sacked as there is no mileage in it at all. However he has left me with more questions than answers with our past two months of underachievement. To have the impact he had on the squad when he came in was an admirable achievement. He came him put an arm around them and took them out of the shadow of José. He told them how good they all were and they responded. To build that momentum and unbeaten run was excellent man management but once the cracks started to appear he was left floundering. His team selections and random appearances by some players left a lot to be desired. We lost all sense of purpose and desire to win matches or give it our all. We know the players were to blame but his lack of motivational skills and ability to fire shots across players bows were big negatives.

In his press conferences he still maintained he had a quality team and then contradicted himself on many occasions. Ole is a smiler and finds it easy to talk about positive history and how big the club is. However, has he got the ability to make the big tough decisions, all that remains to be seen. Is he the cheap option who will toe the line and say the right things. Again all that remains to be seen starting this summer, where some massive decisions have to be made.

I also have doubts about his coaching ability and that includes his staff. Not one player has improved under his tenure so far, in fact I would say that most have regressed. The one area where I expected him to excel was with the strikers but they are the worst bunch as a collective we ever had at the club, in terms of being clinical in front of goal. Ole may be at the wheel but he needs a brand new vehicle to drive.

I don’t want United to become an old boys club where the coaching staff are all ex players or served with SAF. Football moves on at a pace and we seem stuck in the 90’s trying to recreate the days of the treble. We need new blood and new modern ideas. We need to create a new football identity that can help us compete at the highest level and not hanker for the good old days. We need a blueprint for the future and not a plan of the past.

If we do appoint a Director of Football, I want somebody who is qualified to do the role and understands the role. I don’t want an old boy who is a yes man and nothing more than a glorified ambassador for the club. Ed Woodward is the Glazers man and going nowhere. He is out of his depth when it comes to the football side of the club. Hence our displacement from the top table, despite 4 different managers and absolute fortunes spent. We can’t blame the lack of investment, the money has been spent but just been done erratically. We have signed the wrong players at the wrong prices and paid mediocre players superstar wages. That has got to change for sure as it’s not sustainable.

As fans there is nothing we can do to change what is going on at the club. We can’t halt the demise, we just have to hope that the right decisions will eventually be made. I hear of protests and walk outs, aimed at the Glazers and Woodward. It would never work, we have all just renewed our Season Tickets for next season and as always it’s before the current season ends. For all those that didn’t renew, there were plenty to take their places. United is a massive cash cow and it’s continually fed with the commercial side of the business. Football is secondary to that but we all had a choice and my love of United keeps me coming back for more.

I used to think you always had to take the rough with the smooth supporting your team and I still adhere to that mantra. However, as a Manchester band once sang, if I hadn’t seen such riches I could live with being poor.