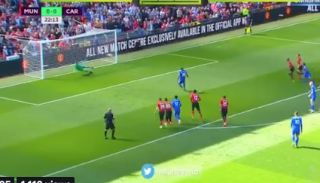 Cardiff City have opened the scoring against Manchester United.

Mendez-Laing’s penalty in the 23rd minute has complied yet more misery on United fans, who have endured a torrid end to the season under Ole Gunnar Solskjaer.

Mendez-Laing was brought down in the box by full-back Diogo Dalot, before slotting home down the middle past David De Gea.

NEXT: Loads of Man Utd fans react to ironic Lukaku and Sanchez poster outside Old Trafford

The Reds must now wake up to avoid an embarrassing final game defeat to relegated Cardiff.

Solskjaer will be hoping his youngsters such as Mason Greenwood can deliver and turn the game around at Old Trafford.

United have Angel Gomes at their disposal on the bench who fans will be hoping can get the opportunity to impress in the second-half.

See Cardiff take the lead below: