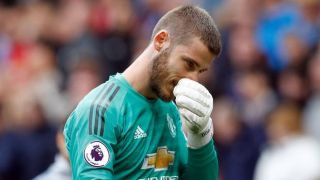 The Reds are behind thanks to a Mendez-Laing penalty in the dead rubber at Old Trafford with Neil Warnock’s Cardiff already relegated.

Things are getting bad to worse for Ole Gunnar Solskjaer who has endured a horrific end to the season since being appointed permament United boss.

United’s problems lie firstly in defence, and surely this is the summer where the Reds finally improve their failing back four.

David De Gea has been at fault for numerous goals in recent weeks, but the defensive problems have remained for much longer.

As per Sky Sports tweet below, The Reds have managed just two clean sheets all season at Old Trafford, the fewest in a single season for over 50 years. It is simply not good enough for a club that should be competing for trophies at the highest level.

Man Utd will finish the season with 2️⃣ clean sheets from their 19 home PL games.

It’s their fewest home clean sheets in a single league season since 1962-63 (2) pic.twitter.com/wNuQgAAnBt