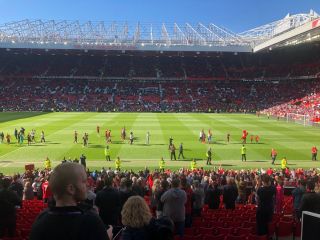 Manchester United’s players have completed the custom ‘lap of honour’ following their final game of the season against relegated Cardiff at Old Trafford.

For many players, it was a walk of shame, especially after today’s humiliating 2-0 defeat.

This must have been an awkward walk for the players, who will surely know they have done their fans a disservice this season. Many fans had already left their seats before the players came out, proving just what a poor season this has been.

It was mainly Cardiff fans who stayed behind to celebrate their famous victory at Old Trafford.

NEXT: Loads of Man Utd fans react to ironic Lukaku and Sanchez poster outside Old Trafford

It could be the last time we see some players in a Red shirt, and manager Ole Gunnar Solskjaer will be aware of the clear-out that is needed this summer.