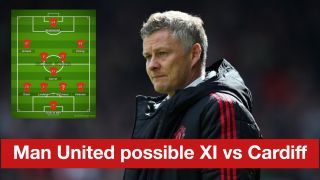 Two years ago, Manchester United disappointed their way to the final match of the Premier League season by failing to win a series of crucial matches that left them irreversibly dwindling at 6th in the table. Luckily for United that season, the Europa League grew in importance and gave Jose Mourinho’s side a route into the Champions League without having to succeed in England’s top flight.

This year, a similar set of results ensued, except there will be no Champions League qualification and no trophy for United. After a depressing campaign, fans need to be given at least something small to look forward to at the end of the campaign. The last Premier League match of the 2016/17 season saw minutes given to six academy players, including goal scorer Josh Harrop, first-team member Scott McTominay, and Angel Gomes, who became the fourth-youngest player in the history of United.

NEXT: Solskjaer will consider offloading star as patience wears thin with player’s attitude

At the absolute least, Ole Gunnar Solskjaer needs to do something similar for Sunday’s match against Cardiff and prove the fans that there is some brightness in the future of the club that does not include the woes of the present. Expect a tribute to the past and a preview for the future in the starting eleven, which could resemble the following.

Given most of United’s promising young goalkeepers are out on loan, de Gea should be retained for Sunday’s match, which could be his last at United. Odds are the goalkeeper will end up staying, but either way, he is a club legend and should be given a huge ovation.

Unlike de Gea, Antonio Valencia has confirmed that he will be departing United, and after ten years at the club, he also deserves to start this match and wear the armband. Having won United’s player of the season once as a right-winger and once as a right-back, he has been an important player during his decade at Old Trafford.

The 18-year-old Irishman, able to play across the backline, should be given his debut at centre-back in a match where United will dominate the ball and likely not face too much in defence. Given some of the performances from centre-backs this season, it is not unlikely that O’Connor impresses his way to a few more appearances next season.

If any circumstances were to cast the tides in favour of Lindelof for this season’s maligned United player of the season award, Luke Shaw’s error against Huddersfield followed by Ander Herrera’s proclamation that he voted for the 24-year-old centre-back to win the award. He is one player who deserves to start in this particular match.

As long as some of the most promising young players at the club are starting on Sunday, place needs to be left for Diogo Dalot, whose up-and-down campaign in the first team is reflective of many past talents who have struggled to adapt to Premier League football. Next season promises to be much better for the Portuguese youngster, who could be at United for the next decade.

18-year-old James Garner seems to have the technical and physical attributes to make the step up to senior football. Drawing comparisons to Michael Carrick due to his ability to dictate and advance play from deep, Solskjaer has name-dropped him in the past as a player who could have greater involvement in the United side next season.

Another player heavily linked with a move away from the club, Ander Herrera is also one that United likely would not want to lose as the midfielder has been a leader on-and-off the pitch since he joined in 2015. One would hope that he also eventually stays at Old Trafford, but with heavy rumours linking him to Paris Saint-Germain, it seems increasingly unlikely by the day.

Yet to sign a contract extension with Manchester United, the ageing Juan Mata could also be facing the end of his tenure at Old Trafford. A lack of playing time this season compounded with questions around the 31-year-old’s suitability to Solskjaer’s quick, transitional brand of football have fuelled rumours that the player could be in his final month at the club.

As aforementioned, Gomes made his debut in a similar situation two years ago, but he has yet to start a full match for the club. Sunday’s dead rubber could be the perfect opportunity for the Englishman to prove he has the credentials to be a part of the senior squad next season, or at the absolute least, move on loan to another club for first-team football.

Making his debut last week against Huddersfield, Chong ultimately failed to impress despite providing an obvious spark. Nonetheless, given the underperformance of every other forward at the club, he has earned the opportunity to start once again in the final match of the season.

Perhaps the greatest prospect in United’s academy, 17-year-old Mason Greenwood missed the match against Huddersfield with an injury but could return to start against Cardiff this Sunday. The young striker has directly contributed to a ridiculous amount of goals across all levels of youth football this season.

Mason Greenwood across all youth levels this season:

Greenwood is a few debut goals away from being a genuine contender to play for United next season given that Marcus Rashford and Romelu Lukaku have misfired this season.