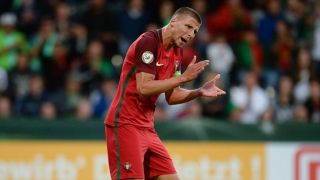 Convenient timing for someone to blab on about a player’s release clause with the transfer window just around the corner. It sounds like someone leaked the information with the view of getting Dias a summer move.

The 21-year-old has emerged as one of Europe’s best young defenders and may be what Ole Gunnar Solskjaer needs to bolster his defence.

A move could see Dias link up with former Benfica defender Victor Lindelof, who this season has probably been United’s most improved player. The Swede will hopefully kick on again next season but he will need to earn his place too.

According to The Sun, the Portuguese star has a £52 million buy-out clause in his existing contract and United are willing to try secure his signature this summer.

After shipping 52 goals in the league this summer, it’s no wonder that we’re being linked with so many defenders.

Talk of Raphael Varane or Kalidou Koulibaly has gone quiet ever since our Champions League hopes were destroyed. Those players want to be playing in the biggest competitions while we settle for the Europa League.

The Sun add that Dias has been on United’s radar for some time.