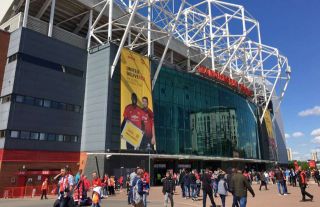 The pair both miss out of today’s final home game of the season against Cardiff, allowing young star Mason Greenwood a chance to start.

But United fans have noticed that Sanchez and Lukaku featuring in a poster for a DHL advertising campaign outside Old Trafford.

Rather embarrassingly, the poster reads ‘Delivered’, which has been far from the truth on the pitch with United failing to make top four for the fourth time in six seasons.

United fans have been unhappy with the pair all season, and this awkward poster has provided some funny responses from Reds on twitter.

Some Reds think that these players should be the ones who are shipped far away from Old Trafford this summer.

Season’s over. Look at the irony in the @dhlexpressuk Manchester United advert at Old Trafford. Didn’t Deliver!!!! pic.twitter.com/X6xJj9nWYO

It's a sign, thank you DHL for doing your part in shipping these 2 off. Please send tracking number so we can be sure that they've reached their appropriate destinations. No insurance needed.

Lukaku and Sanchez advertising for a top delivery agency🤣Just shows how sponsors and business have no idea pic.twitter.com/rwpPFpBC5y

Nah, this is their way of saying that Lukaku and Sanchez need to be packaged and shipped off 🤣

Lukaku kicks the package and it lands 100 miles away in just 2 minutes and 30 seconds!

Deliver them both to Italy