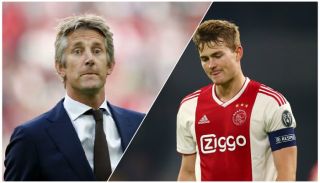 Ajax suffered a massive blow on Wednesday night when Tottenham Hotspur’s Lucas Moura scored a last-minute winner to knock the Dutch giants out of the Champions League semi-finals.

Sadly for Ajax fans, they’re squad is likely to be cleared out this summer with a number of Europe’s elite clubs sniffing around their best players.

Frenkie de Jong, 21, has already agreed to join Barcelona on a five-year deal which begins on 1 July. Ajax will receive £65.3m for the midfielder’s signature, as per The Guardian, which shows how much these top clubs value the youthful prospects at the Eredivisie club.

Ajax fans will now wonder who is next to leave the Johan Cruyff Area.

One of their players attracting lots of attention home and afar is Matthijs de Ligt.

Mundo Deportivo in Spain claim De Ligt likes the idea of joining his teammate De Jong at Barcelona, but add that his agent Mino Raiola would prefer his client to join Manchester United, Juventus or Bayern Munich.

It’s no secret that United need defensive reinforcements this summer and De Ligt’s performances this season in the Champions League give plenty of reasons to be excited about his potential.

For a 19-year-old, we’re talking about an exceptional player here.

Ajax CEO Van der Sar accepts they are likely to lose De Ligt in the coming months and he envisages the centre-back moving to the Premier League or La Liga.

“I think these will be De Ligt’s final games with Ajax, but I hope he goes out on a high,” Van der Sar told Sky Sport Italia, as quoted by the Manchester Evening News.

“He’s been here since he was a child and will end up at a big club. I think he’ll go to England or Spain.”

Not having Champions League football next season will go against United in these situations.

De Ligt will have plenty of opportunities to play in Europe’s most prestigious competition next season. And, as we all know, the Europa League is below that.