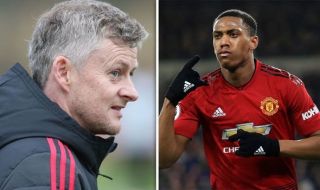 The Reds will reportedly listen to offers for Anthony Martial this summer with Ole Gunnar Solskjaer said to be appalled by his attitude.

The French attacker has been hit and miss again all season but recently committed his future to United by putting pen to paper, as per The Guardian.

Martial has a tendency to impress in bursts but continues to look a lazy sod on the pitch. One minute he looks a potential Balon d’Or winner for the future, the next he can’t be arsed to warm up for a match.

According to a report by The Sun, Solskjaer will consider offloading the sulky winger due to his lack of effort in training.

This news won’t upset many of the same fans who were buzzing when Martial signed his new deal, but since then he’s gone backwards and Solskjaer is reportedly thinking about dropping him for the final game of the season against Cardiff City, starting Mason Greenwood from the club’s academy instead.

Solskjaer is trying to make it clear to his players that they won’t last under his management unless they work hard. And, it’s about time someone warned Martial.

Fans want to see players fight for the shirt next season and Martial won’t get away with dragging his feet much longer. For a player with such ability, it’s hard to watch when his questionable body language resembles his performances of late.

We all want Martial to kick on next term if he’s still at United.