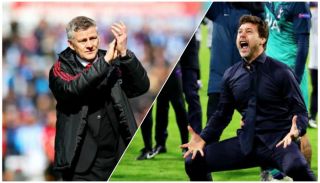 Tottenham Hotspur came back from 2-0 down to beat Ajax 3-2 on Wednesday night.

It proved to be another night of drama as Spurs stun European football to make it an all-English final in the Champions League this season, with Barcelona throwing away a 3-goal deficit against Liverpool the previous night.

The result sees Pochettino — previously linked with succeeding José Mourinho at Manchester United – lead Spurs to their first ever Champions League final. A fitting achievement after making the Lilywhites a proper CL side since taking over at White Heart Lane.

People say he’s won nothing, but everywhere he’s been his teams progress.

Pochettino deserves credit for inspiring his team to a magnificent comeback at half-time last night as Spurs scored three second-half goals through one-time United target Lucas Moura to book their place in the final.

His emotional post-match interview with BT Sport is worth a watch, as seen below.

“Thank you football. Thank you my players, they are heroes.”

“Without football it is impossible to live.”

Mauricio Pochettino cries during his post-match interview with @DesKellyBTS.

This means everything to him… pic.twitter.com/ArpQwwnwDH

Wednesday’s result has left a lot of Reds wondering whether the club made the right decision to appoint Ole Gunnar Solskjaer back in March, a call which saw United snub the Argentine coach.

Ed Woodward must be really wondering why he did not go all out for Mauricio Pochettino. What a shame.

Pochettino, what a manager! Spurs are gonna takeover Madrid, every bit of it. They’ll outnumber the scousers.

Pochettino is a decent man. And more importantly he seems a genuine man.

We chose Ole over trying to get Pochettino 😂😂

Ole is a legend but should of went for Pochettino and let him build the next dynasty. Don’t think Ole has a clue what to do. #mufc

Pochettino will leave Spurs next season

Could well be PSG, Madrid, Bayern or Man City.

Been thinking ever since the Cup final loss to Chelsea that United should put Mauricio Pochettino as the top target to replace Mourinho. Positive style of play, Players like Martial, Pogba etc with new starts, positive energy at the club, manager in his ascendancy. #ManUnited 🔴