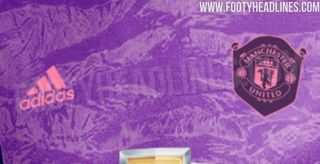 The folk over at Footy Headlines are always first to find leaked photos of new football kits.

The latest to concern Manchester United fans is the 2019/20 goalkeeper kit which has a garnish feel to it coloured purple and pink.

Whether or not David de Gea will be wearing it next season remains to be seen, but there’s a chance when he sees it he will be on the first flight out of Manchester.

Keepers tend to stand out with colourful kits but United and Adidas are trying something new here.

We don’t see figures on how many shirts each kit sells annually, but you would wonder how popular goalkeeper jerseys are with kids and like-minded adults.

De Gea’s performances towards the back of the season might push back sales a bit.