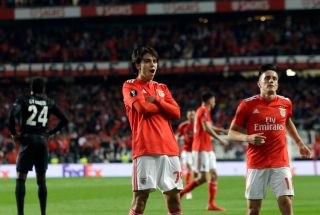 Primeira Liga duo Bruno Fernandes and Joao Felix have both been strongly linked with moves to Manchester United, Manchester City and Juventus.

Both players are considered hot property in Portugal after putting in a number of stunning displays for their clubs throughout the season.

Jornal de Noticias recently claimed that United sent scouts to watch Felix, as cited by Sport Witness, in Benfica’s 5-1 victory over Portimonense. He would be expected to give the attack a much-needed boost, but we shouldn’t underestimate the jump from the Portuguese to Premier League.

Meanwhile, Tutto Mercato Web in Italy claims that the Reds are ‘in pole position’ to sign the Benfica sensation. It is suggested that United are ready to offer €75m for Felix, which is €45m short of his £120m buy-out clause.

Felix’s stats this season help explain why there is such interest in his signature – 17 goals and eight assists across all competitions.

It would be great to see Ole Gunnar Solskjaer abandon the view that United care more about shirt sales than developing talent. Signing Felix, one of the best young talents in football the moment, would go a long way towards putting MUFC in the right direction.

Some strong rumours flying around that Both Manchester United Targets Joao Felix and Bruno Fernandes are heading to Manchester City. Tixi Bergstein has already met with Felix’s parents to discuss transfer. I’m sick and tired of this incompetent bastard Ed Fucking Woodward. 🤢😡

We want young, hard-working and talented players at Old Trafford. Not mercenaries. We’ve got more than enough of them.