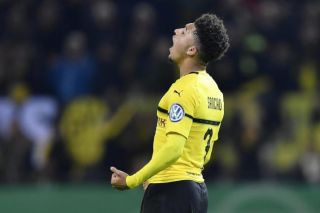 Last weekend’s 1-1 draw away to Huddersfield Town put an end to United’s hopes of a top four finish, with Tottenham and Chelsea likely to take the last two spots.

Ole Gunnar Solskjaer’s men are sixth in the table and know to bridge the gap from the top is going to take a longer than one year, so the Norweigan must start rebuilding for the future.

And it is Sancho, 19, who has been touted as a potential future star at Old Trafford.

But according to the Daily Mail, United could miss out on their £100m target after missing out on Champions League football.

Sancho had his first real taste of Champions League football with Dortmund this season and dropping down to Europa League level – when he could stay at Westfalenstadion and remain in the CL for another year – seems a big ask for a young player destined for great things.

For instance, the last 12 months has seen Sancho become one of the most exciting prospects in European football. He will want to kick on next term.

Joining United would still be a massive move for the Dortmund winger, forever a step up, but Sancho will have no shortage of interest. Other clubs will come knocking and they may be able to offer the England international Champions League football.

This is the price United must pay for their shortcomings. And who in the right man believes the Glazers and Ed Woodward will bother to fix this mess? They can hire the best player to run the club commercially, but not on the pitch.