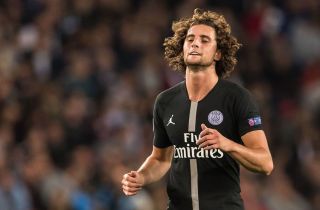 Paul Pogba is said to be turned off by the idea of playing in the Europa League next season, but perhaps Manchester United wouldn’t be in this situation if players like the French star turned up for the occasion most weeks.

The midfielder’s stats in the Premier League may signal a better goal return than before, though it’s the naked eye that paints a more realistic image for his performances in a red shirt. Below par!

L’Equipe have linked us with a move for PSG’s wantaway midfielder Adrien Rabiot in Wednesday’s edition of the newspaper. The reports were initially brought to our attention thanks to Sport Witness.

NEXT: Man Utd suffer setback in £100m transfer after failing to qualify for the Champions League

United are not the only club listed as an interested party to sign Rabiot, but the report specifically claims that the Reds have previously watched the Frenchman with the view of buying him to replace Pogba.

The problem with Pogba is he’s never made it clear he wants to stay at United, so do we just pretend everything is okay? It doesn’t work like that.

That said, Rabiot has his issues of his own in Paris and many people there will tell you communications between him and the club have long turned sour.

Rabiot’s contract is about to expire so bringing him in and allowing Pogba leave for Real Madrid would leave a chunk of funds to strengthen elsewhere.