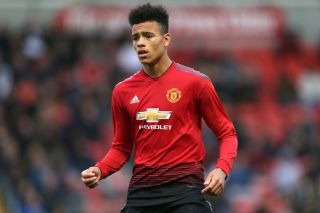 Throw the youth in!

The worst thing about this season and how it’s ended with the Manchester United players. They have been guilty of throwing the towel in too many times and there’s now a belief among fans that they don’t care as much as they should.

Does calling them mercenaries come a bit strong? Not when you see the same lads in the terrace travelling home and away every week, only for the players not to acknowledge them after a bad run of games or a heavy defeat to Everton…

Instead they jump to social media after each game, living it up to their big online audience, but those words rarely turn into actions. They’ve become meaningless.

Solskjaer said last weekend that some players won’t be seen in a United shirt. Now, unlike the players, he should show he means everything he says.

According to the Manchester Evening News, Solskjaer is hopeful youth team striker Mason Greenwood returns from his injury in time to face Cardiff City. The Manchester-based outlet adds that Greenwood is one of four young players that could feature in the Premier League meeting.

Tahith Chong came on from the bench in the draw away to Huddersfield Town last weekend and should come into the team by starting ahead of Alexis Sanchez.

The final player mentioned by the MEN is Irish kid Lee O’Connor, who plays at full-back and has been training with the first team.

Which of these youngsters do you consider most exciting for the future of Manchester United?