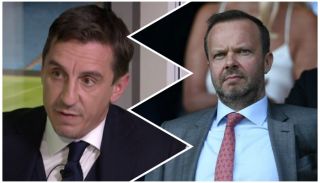 Gary Neville has had it with Ed Woodward.

This is not the first time the former Manchester United defender has publicly slated the club’s under pressure executive vice-chairman.

While we believe you must start with the Glazers, who, let’s face it, are more than happy with the work Woodward is doing to make their wallets heavier. The problem is they don’t care about the football side of things at Manchester United.

Speaking on Sky Sports for Monday night’s coverage of Man City’s win over Brighton, Dave Jones asks Neville if Woodward had phoned him. He responded:

“No but Dave, the shambles of last week,” Neville said, as quoted by The Express. “This is why I’m going by the way, I’m gone. It takes a lot for me to criticise my own club.

“How can it be that four players that who have never been businessmen, never managed a club, never coached, never been sporting directors, are put forward for this amazingly difficult role at the most difficult team at the biggest club in the world?

It’s a valid point, though. This man has gone seven years failing in his job yet he still keeps his role without any questions being asked.

How – at a club like Manchester United – is that allowed?

Neville was then asked about the team progressing next season under Solskjaer, while he thinks it will be some time before we see the Reds challenge for a league title again.

“Have eleven players on the pitch who want to play for the club, that’s a starting point, who want to be there, who run to the last minute of every single match.

“You’ve got a coaching group who love the club and who will die for the club. I know that for a fact.

“My view is get a group of players in that dressing room who are aligned and want to do their very best for Manchester United and see it as a great football club.

“There are definitely five or six people in that dressing room that look to me at the moment like they don’t want to be there always.”

Gary Neville FINALLY says it how it is to Ed Woodward. We’ve waited so long for this. He has to take blame. pic.twitter.com/93B5i7kdwU