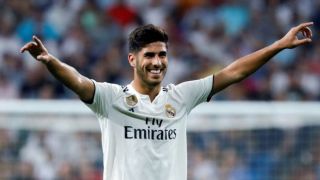 Despite being regarded as one of the European game’s most prestigious talents, it has been a difficult season for Marco Asensio in a turbulent campaign for Real Madrid. According to reports, the 23-year-old winger is angling for a move to the Premier League, with both Liverpool and Manchester United vying for his signature.

Spanish source Don Balon, cited by Caught Offside, claim that the men from Merseyside are currently in pole position to sign Asensio with Madrid asking for an eye-popping fee of £128m to prise him away from the Bernabeu.

But it’s a different story elsewhere with our friends at Sky Sports linking the player – who has struggled for game time this season – with a move to United, who are not willing to pay more than £69m (80m euros) for the Spain international.

If Asensio has any sense at all, Old Trafford is the only option. Of course, the chances are equally high that he’ll stay put and won’t go anywhere, but this is silly season and with United’s bosses planning a revamp, there are bound to be several big names in the frame.

United need to break the habit of signing superstar names for large remuneration but little reward, as it is one of the reasons why things have gone so badly wrong over the last few years. I don’t think it’s necessarily the way to move forward, packing your team with big-name superstars.

But it’s no secret we desperately need a right winger having failed to adequately replace Asensio’s former teammate Cristiano Ronaldo despite his departure coming over ten years ago. With United also rumoured to be in talks with Juventus marksman Paulo Dybala, as per the Daily Mail, I’d take both but Asensio would be the preferred option as acquiring a wide player is our priority.