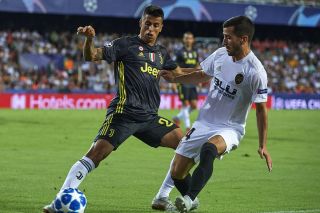 Manchester United need defensive reinforcements this summer and every day we see top defenders linked with summer moves to the club.

It’s bound to get worse when the transfer window opens and we’re trying to think of a way to track how many players in total the Reds get linked with throughout the summer as a bit of fun.

According to Tutto Mercato Web, United are watching Portuguese international and Juventus star Joao Cancelo, who is reportedly unhappy in Turin.

The report claims United have an offer of €50m ready to sign the full-back, but that amount is south of what Juve are demanding with TMW stating a price of €65m would be enough to prize him away.

To get the transfer over the line though, United might throw Matteo Darmian into the deal.

NEXT: (Video) Ole Gunnar Solskjaer admits Man Utd have not been good enough

The Italian has not cut the mustard at Old Trafford following his transfer from Turin in 2015 and few would be sorry to see him leave this summer.

It’s either sign a new right-back, stick with Ashley Young or make Diogo Dalot a starter next season even though Solskjaer clearly doesn’t prefer him to Young in the role just yet.

Cancelo is a productive attacker with the ability to become one of the best full-backs in football. He won’t come cheap, but I wouldn’t dare say no to signing a player like him who would improve the side.

Moreover, Cancelo is not the only Juve player with strong United links at the moment. Paulo Dybala could also be on his way.

Italian outlet Calciomercato claims United have made contact with the Italian giants over their £85m-valued asset.