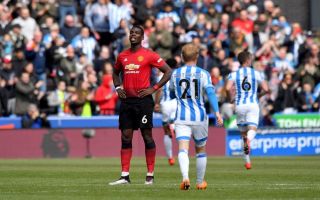 Huddersfield had lost 23 of their last 25 games. They had lost their last eight on the spin and pilfered only 15 points in a torrid season. The Terriers, relegated since March and on course to become the second worst team in Premier League history, had sunk into the Championship without a trace.

If this pathetic, pitiful shambles that’s supposed to represent the cream of England’s most successful club was a dog, it would have been put to sleep long ago. When an animal is so far beyond the point of no return, the kindest thing to do – as hard as it is – is to say goodbye, end the suffering and put it out of its misery. And so United have come full circle – just as bad here as we were against another lowly team in blue and white back in August.

NEXT: Crucial summer ahead for Manchester United – opinion

We began the season as we end it – a team, a club and a fanbase at its lowest ebb for years and a complete and utter mess. Coming off the back of our summer of discontent, that day marked the beginning of the end for Jose Mourinho. Mourinho had to go, but – now more than ever – it’s abundantly clear that he may have been right in his assessment of these players after all. It really was a miracle to get this squad, a squad just about the sixth best in the land, to second place last term.

For Brighton & Hove Albion, read Huddersfield Town. United have visited the Amex twice and lost twice. We’ve visited the John Smith’s Stadium twice, and have taken one point. Two tales of woe nine months apart that have been symptomatic of Manchester United’s recent malaise. Two nadirs bookending a season that I can’t wait to end. I’m not even angry, I’m not even upset. I’m past ranting. Most damningly of all, I’m even surprised any more.

Scott McTominay epitomised the exuberance of youth and was once more the shining light of a desperately dark season in which storm clouds have enveloped Old Trafford. He and Ander Herrera might not be the most brilliantly skilful players, but they give 100% every week and would die for the club and the badge. Some of their illustrious predecessors did, quite literally, give their lives for the club. Any day of the week I’d have eleven of both in my team ahead of these over-rated, over-paid, don’t-give-a-shit, want away mercenaries. Yet we’re letting Ander go but moving heaven and earth to indulge and keep hold of the has beens, what might have beens and never-weres. The United shirt and all it encompasses should be the crowning glory of a player’s career. For too many, it is looking like an irrefutable burden and merely a passage to an overinflated paycheck.

For the first time in my life, I turned off the Huddersfield match. Disengaged and out of touch, I turned off and went to the gym. You can bet I put more effort into my 40-minute workout than our players have over the entire season. For the first time in my life, I felt as if I didn’t care. I’m sick of the idiots on the pitch, I’m sick of the clowns in the boardroom and most of all I’m just fed up of how no one seems to be held accountable for anything.

Watching Manchester United gives me no joy anymore, rather it’s a compulsive need, a rite of passage. It’s soul destroying, energy sapping and leaves me exhausted. I wanted the season to end after the brutality of Brighton two matches in. 35 games later, I’m delighted this torture is almost over. For United, too, it feels like we’re back to square one. That dog has seen better days.

If only the efforts of the players matched that of our once again magnificent away support. They – we – anyone who loves United, deserve better.

Three months ago, everything Ole Gunnar Solskjaer touched turned to gold, these players were running through brick walls for him, desperate to prove their point and lead us all up to the garden path during the longest new manager bounce in history. That resurgence – that thrilling throwback to the halcyon days of yesteryear which brought 14 wins out of 17 and evoked memories of our heyday – now feel like a distant pipedream. Indeed, when it matters most, we’ve won two out of ten and are on a five-match winless run. Ole might be at the wheel, but there’s no engine and the vehicle he’s driving is smashed to smithereens, beyond any tangible repair.

With the riches, came Ole’s reward, but the shackles returned and the players reverted to type. You can’t help but feel he’s been set up to fail. Results are at a 57 year low and we’re in the Europa League next term under a promising but inexperienced manager. The board are as dithering, unambitious and indecisive as ever. Messrs Jones, Young, Rojo and Matic et al are still sitting pretty on God-knows-how-much a week and we’ll struggle to recruit what we need to challenge for the top four as well as jettison the deadwood. The cycle begins again. Strap yourselves in.

Given where Mourinho left us, it is to Ole’s immense credit that we ran in the top four race for so long. You can question the continued inclusion of Young, of Jones and of Matic, and the formation is changing every week. We all love Ole but no one should be immune to criticism. That said, you should be comfortably beating the worst team in the league regardless of tactics, formations and personnel.

But Solskjaer has inherited a mess, not of his own making and has a job that is rapidly looking nigh on impossible with an imbalanced squad desperately lacking in both quality and quantity. In McTominay and Tahith Chong, there were promising glimpses of the future at Huddersfield.

Right now, it’s all we’ve got to cling on to.