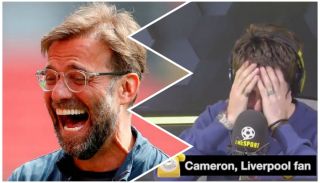 It seems that this season, with Liverpool doing so well, the rules should be changed to allow for whoever finishes second in the Premier League to win a trophy.

That’s according to one Liverpool supporter — Cameron the Red — who called talkSPORT after Man City’s 1-0 win over Leicester City.

So, if both teams win on Sunday, LFC will end the season on 97 points but will be beaten to the title by City by a single point.

When asked what he would call the trophy if such an honour existed, he said: ‘The Premier League joint-winners trophy’.

As United fans, listening to Liverpool ones behave so childishly, it makes for entertaining radio but there will always come a point when you have enough.

Sports Bar host Andy Goldstein thought it was a wind-up. Listen below.

“I’m a Liverpool fan, we should get a trophy even for finishing second!” 🏆

“It doesn’t need to have a name, they should just give it to Liverpool.” 🔴

“Ferguson never got that many points.”#LFC fan tells @AndyGoldstein05 the club should get a trophy for second. pic.twitter.com/3Jmk17gmAv