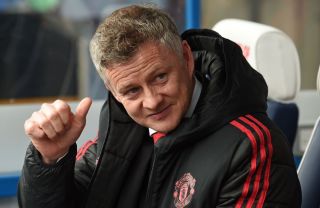 Manchester United take the lead into half-time at the John Smith’s Stadium, thanks to an opening goal by Scott McTominay.

The Scotland international struck the ball with his left foot before Huddersfield goalkeeper Jonas Lossl committed a horrible error to let the ball slip through his fingertips.

He form has been excellent since Ole Gunnar Solskjaer came in, so it’s no wonder that he keeps starting him in midfield. A deserved winner of Manchester United player of the month for April.

NEXT: (Watch) Embarrassing moment for Ashley Young as Man Utd full-back trips over cone during warm-up

Huddersfield haven’t created much in the game thus far, although David de Gea was forced into making a save just before the break.

The Reds could do with a second goal to close out the game. That said, when you look at both teams on paper, how on earth are we not giving sides like this a thrashing – home or away?

We’ve had a look through Twitter to find some of the best reactions to United’s first-half against The Terriers.

This is diabolical to watch.

Matic couldn’t release a pass even if he was a hall monitor.

Rashford has the footballing brain of a League Two player.

Pogba jogs like he’s in Magaluf on the beach.

Young doesn’t know what year it is.

Yep, United start quick and drop off after half an hour. Standard in the last couple of months.

We’ve cleared out a lot of players over the last few years. But for some reason Jones keeps surviving & I don’t get it. You’d get good money for him from a Prem club if he was up for sale.

Nice of Lee Mason to wait for Huddersfield’s attack to end there before stopping the game for Rashford‘s head injury.

We went from dominating the first 30 mins of the game, to allowing Huddersfield to have more time on the ball and allowing them to attack us. Always happens before we concede the equaliser. #MUFC

Why is Mata playing in 1989? He genuinely looks like he’s 30 years behind the play. He’s thinks he’s playing balls to Mark Hughes.