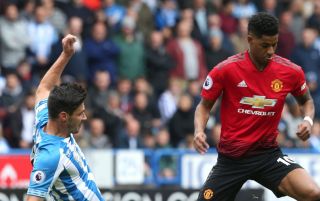 Another terrible result for Manchester United which completely kills our chances of a top four finish.

Scott McTominay’s opening goal was cancelled out in the second half after Isaac Mbenza was sent clear in on goal following a long punt up the pitch by Jonas Lossl.

The players were gutless and didn’t look like they were willing to put in a real shift to dismantle a weaker opponent.

As a fan, it’s hard to find a connection with this United side. Especially when week after week you find yourself questioning their commitment.

That shouldn’t be the case at United.

Ole Gunnar Solskjaer has an almighty job on his hands to get these boys playing football, as well as deciding who should leave this summer which shouldn’t be all that difficult.

The Reds had chances to win the game at the end with Tahith Chong testing Lossl, as well as Paul Pogba, who hit the crossbar a second time in the dying moments.

See below for how United fans reacted to the game on Twitter.

This side is the result of a half competed Van Gaal plan & a half completed Mourinho plan. It’s what happens when you allow a businessman to run a football club.

Who does Rashford think he is? Attitude stinks, reminds me of Memphis and his early days at United. But because he’s English, gets a free pass from everyone.

Ed Woodward’s most pressing concern from today will be the airtime the Chevrolet & Kohler logo’s on the players’ shirts got.

God this really is a disgrace, all of them just jump in a bin.

To think some fans actually want United to qualify for Champions League. Rather play Europa, give young players some experience & build. Current squad is hopeless.

This is the worst United side in my lifetime. They make my heart pump piss.

This is painful to watch . Woeful united